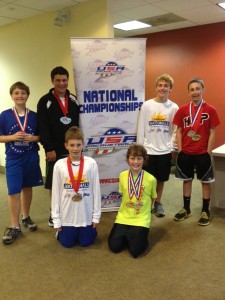 Five junior players made the trip to Fullerton, California for Junior Nationals at the Meridian Club, also the site of Adult Nationals last month.  These five were stellar in their performances and we are proud of them!

From Bellingham, the Birnel family represented well as three brothers took to the courts.

Jake Birnel played in Boys 14 Singles and Doubles, making his way to the semi finals of singles, where he lost in a tiebreaker to his doubles partner, Mauro Rojas. He went on to defeat Wayne Anton Ive to claim 3rd place in the Gold Division. In Doubles play, Birnel and Rojas took 2nd place in the Gold Division, losing in a tiebreaker to Barth and Benson. Jordan Barth was the first place winner in both singles and doubles.

Jordan Birnel entered Boys 12 singles, and found tough competition in his age group, losing in the gold round, but coming back to take 1st Place in the White Round of the Olympic Flight format.

Nick Birnel stormed Nationals, playing in three events: Boys 10-, Boys 10 Doubles, and Mixed 10 Doubles.  He fought his way to claim 4th Place in the Gold round of 19 competitors. Nick then went on to win 1st place in both Boy’s and Mixed Gold Doubles. Way to go Nick!

From Lynden, WA Ryan Holz and brother Jeremy Holz made their presence felt!

Ryan Holz played in Boys 12 singles and doubles. In Singles, after losing his first match, Ryan came back with some great play and took first place in the Red Division.  In Doubles, he and partner Sean Henry from Indiana teamed up to play great doubles and took second place in the Gold Division, playing five matches.

Jeremy played in the 10- Boys division lost in the quarters after a great tiebreaker win against Julius Ellis of Stockton, CA.